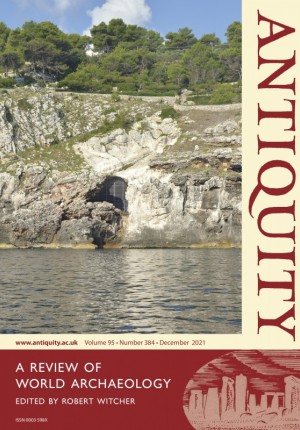 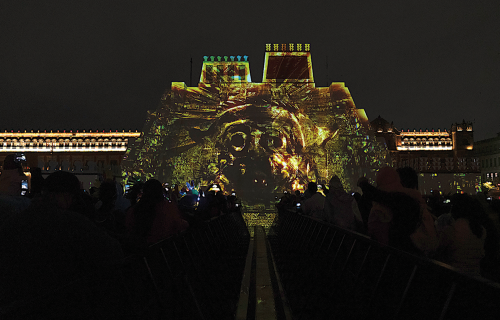 The Romanelli Cave in south-east Italy is an important reference point for the so-called ‘Mediterranean province’ of European Upper Palaeolithic art. Yet, the site has only recently been subject to a systematic investigation of its parietal and portable art. Starting in 2016, a project has recorded the cave's interior, discovering new parietal art. Here, the authors report on a selection of panels, featuring animal figures, geometric motifs and other marks, identifying the use of different types of tools and techniques, along with several activity phases. These panels are discussed with reference to radiocarbon dating of nearby deposits, posing questions about chronology, technology and wider connections between Upper Palaeolithic cave sites across western Eurasia.

Funerary art has the body as its main material component, expresses responses to death and offers insight into relationships between the living and the dead. Chinchorro hunter-gatherer-fisher societies along the Atacama Desert coast provide a key example of such connections, having developed one of the world's oldest-known systems of post-mortem body transformation (c. 7000–3250 BP). A study of 162 modified Chinchorro bodies identifies diachronic changes in these practices, including a decrease in internal stuffing—adding invisible contents that created corporeal volume—and an increase in external body treatment that created visible features. The authors propose that such manipulation was a meaningful form of social embodiment designed to construct a collective identity.

The subsistence practices of Holocene communities living in the Nile Valley of Central Sudan are comparatively little known. Recent excavations at Khor Shambat, Sudan, have yielded well-defined Mesolithic and Neolithic stratigraphy. Here, for the first time, archaeozoological, palaeobotanical, phytolith and dental calculus studies are combined with lipid residue analysis of around 100 pottery fragments and comparative analysis of faunal remains and organic residues. This holistic approach provides valuable information on changes in adaptation strategies, from Mesolithic hunter-gatherers to Neolithic herders exploiting domesticates. A unique picture is revealed of the natural environment and human subsistence, demonstrating the potential wider value of combining multiple methods.

The shell-midden site of Riņņukalns in northern Latvia offers a rare opportunity to study long-term trends in ceramic production and function at a European hunter-fisher-gatherer site. Riņņukalns was occupied from the sixth millennium BC, with the midden developing from the later fourth millennium. Here, the authors discuss the chaîne opératoire and function of the Riņņukalns material, showing that pottery was used in both the pre-midden and midden phases primarily to cook aquatic and porcine resources. The technology used to produce these cooking vessels, however, changed over time, with new firing techniques associated with a shift to the use of shell temper. The results have implications for understanding prehistoric technology and subsistence in other parts of the world.

Recent aDNA analyses demonstrate that the centuries surrounding the arrival of the Beaker Complex in Britain witnessed a massive turnover in the genetic make-up of the island's population. The genetic data provide information both on the individuals sampled and the ancestral populations from which they derive. Here, the authors consider the archaeological implications of this genetic turnover and propose two hypotheses—Beaker Colonisation and Steppe Drift—reflecting critical differences in conceptualisations of the relationship between objects and genes. These hypotheses establish key directions for future research designed to investigate the underlying social processes involved and raise questions for wider interpretations of population change detected through aDNA analysis.

Across Eurasia, horse transport transformed ancient societies. Although evidence for chariotry is well dated, the origins of horse riding are less clear. Techniques to distinguish chariotry from riding in archaeological samples rely on elements not typically recovered from many steppe contexts. Here, the authors examine horse remains of Mongolia's Deer Stone-Khirigsuur (DSK) Complex, comparing them with ancient and modern East Asian horses used for both types of transport. DSK horses demonstrate unique dentition damage that could result from steppe chariotry, but may also indicate riding with a shallow rein angle at a fast gait. A key role for chariots in Late Bronze Age Mongolia helps explain the trajectory of horse use in early East Asia.

Important discoveries over the past 15 years in the coastal area between Huelva and Málaga in Spain have illuminated the beginnings of the eighth-century BC Phoenician diaspora into the Western Mediterranean. Here, the authors combine Bayesian modelling of recently published radiocarbon dates with the latest archaeological data to investigate the Phoenician presence in southern Iberia. Their assessment of its significance for the Late Bronze and Early Iron Ages in the Western Mediterranean contributes not only to understanding the integration of the Phoenicians into local communities, but also to apprehending the mechanisms of colonisation and pre-colonial situations elsewhere in protohistoric Europe and other world contexts.

The role of ferrous metallurgy in ancient communities of the Circumpolar North is poorly understood due, in part, to the widespread assumption that iron technology was a late introduction, passively received by local populations. Analyses of two recently excavated sites in northernmost Sweden, however, show that iron technology already formed an integral part of the hunter-gatherer subsistence economy in Northern Fennoscandia during the Iron Age (c. 200–50 BC). Such developed knowledge of steel production and complex smithing techniques finds parallels in contemporaneous continental Europe and Western Eurasia. The evidence presented raises broader questions concerning the presence of intricate metallurgical processes in societies considered less complex or highly mobile.

The highland Wari (AD 600–1000) were an influential and expansive Andean civilisation, yet the nature and organisation of Wari power is debated. For example, it is suggested that coastal Nasca was governed by Wari, but doubts remain about its role in the region. Recent excavations at Huaca del Loro in Nasca have uncovered rectilinear compounds, a D-shaped temple, a large cemetery and a domestic area. The authors suggest that this evidence reflects Wari colonisation, undertaken during a period of primary expansion, on a site with long-established ties between Wari and Nasca. The use of multiple colonising strategies and local responses may reflect imperial situations in other world civilisations.

The obsidian mirror associated with the Elizabethan polymath and magus John Dee (1527–1608/1609) has been an object of fascination for centuries. The mirror, however, has a deeper history as an Aztec artefact brought to Europe soon after the Spanish conquest. The authors present the results of new geochemical analysis, and explore its history and changing cultural context to provide insights into its meaning during a period in which entirely new world views were emerging. The biography of the mirror demonstrates how a complex cultural history underpins an iconic object. The study highlights the value of new compositional analyses of museum objects for the reinterpretation of historically significant material culture.

The forgotten Eastern Front: dealing with the social and archaeological legacies of the Battle of the Rawka and Bzura Rivers (1914–1915), central Poland
Anna I. Zalewska and Grzegorz Kiarszys
View abstract

While the Western Front of the Great (or First World) War is deeply engrained in the European historical consciousness, memories of the Eastern Front are less prominent. Here, events have been repressed, obscured by the subsequent experience of the Second World War and by heritage policy in the region. The authors present the results of archaeological investigations of a battlefield in central Poland, where static trench warfare was fought between December 1914 and July 1915. A unique landscape palimpsest was formed, the present neglected state of which is a material expression of contemporary attitudes to the legacy of the forgotten Eastern Front. The study illustrates the wider intersection of warfare, identity and memory.

Contemporary life has become deeply entangled with the digital. Every day, huge quantities of data, or digital artefacts, are generated. To date, the archaeological study of these artefacts has been limited, its potential demonstrated by a few initial studies and, more recently, the emergence of archaeogaming. If archaeology seeks to understand human culture, however, the study of these digital artefacts must become mainstream. This will require collaboration with computer scientists to bring an archaeological sensibility to understanding the virtual. Ultimately, the aims and methods required resemble those that archaeologists have already developed, but require a change of mindset if they are to be widely deployed for the study of digital artefacts.

While there has long been an archaeological interest in diverse gender identities and sexualities, queer theory was first introduced into archaeological discourse only in 2000 with the publication of ‘Queer Archaeologies’, a special edition of World Archaeology. Growing out of the exciting work being done by queer archaeologists and the increasing interest in queer theory and the archaeologies of sexuality, the National Parks Service (United States), led by Megan E. Springate, digitally published LGBTQ America: a theme study of lesbian, gay, bisexual, transgender, and queer history in 2016 as part of the LGBTQ Heritage Initiative. The goal of the LGBTQ Heritage Initiative and LGBTQ America was to explore the nuances of LGBTQ+ heritage and history in the USA. Two recently published volumes, Identities and place and Preservation and place, edited by Katherine Crawford-Lackey and Megan E. Springate, are collections of a selection of the chapters originally published as part of LGBTQ America. Identities and place and Preservation and place collectively cover many issues affecting LGBTQ+ identity, history and cultural heritage.

The burials at the Neolithic cemetery Kadruka 23 in Sudan have yielded adornments and bone and lithic artefacts that occur as distinct stages of the chaîne opératoire. This article reports on a hitherto unrecognised funerary practice that highlights the importance of craftsmanship for Neolithic communities in life and beyond.

Lidar reveals the presence of a precinct at the Classic Maya city of Tikal that probably reproduces the Ciudadela and Temple of the Feathered Serpent at the imperial capital of Teotihuacan.

Excavations at the early medieval stronghold at Kłodnica, eastern Poland, revealed the largest known deposit of grain legumes in Europe. Dating to the turn of the tenth to eleventh century AD, and accompanied by a notable assemblage of finds, the discovery points to inter-regional connections.

Morphological and compositional analysis of glass beads from three shipwrecks in the Indian Ocean world has increased our understanding of the chronology and distribution of mid-fifteenth to mid-seventeenth century glass.

Geophysical survey and test excavations have located the remains of St Mary's Fort, the 1634 fortified settlement built by the European settler-colonists who founded the Maryland colony. The archaeological remains contrast with historical descriptions of St Mary's Fort, offering a unique opportunity to understand Maryland's earliest and most poorly documented period of colonial life.